The Future of Work | PRECISION 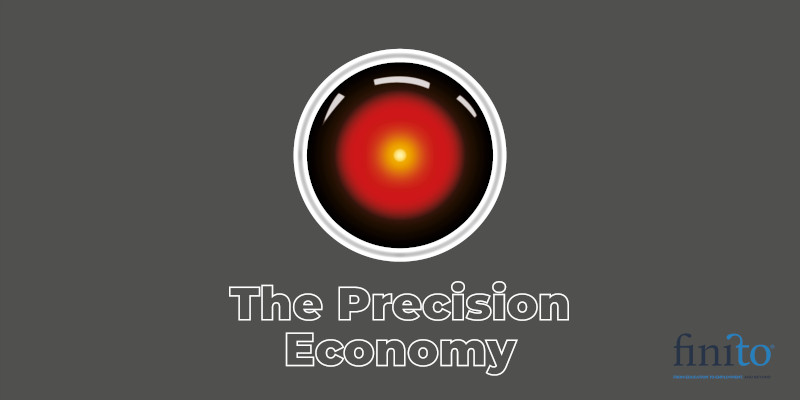 With the world of work changing at such a rapid rate, we’re quickly approaching a fork in the road that’s bound to determine the future of humanity’s relationship with work. For those of us raised on Aldous Huxley and Suzanne Collins, the challenges presented by the world yet-to-come are endlessly fascinating.

How can we get a head-start on these coming problems? What are the most important skills for young professionals to develop right now? Should we be prepping our torches and pitchforks for the artificial intelligence of the future, or should we be more concerned about stagnant wages, discrimination and rising inequality?

In this series, based on Matthew Taylor and Fabian Wallace-Stephens’ research for the RSA, using detailed scenario modelling with leading engineers Arup, we’re going to examine the crossroads on the horizon, and explore a few threads from the multiverse of potential futures.

Last week we explored what the future of work might look like if we’re surprised by a financial crash similar to the one we struggled through in 2008. Prior to that, we took a look at a world dominated by massive developments in technology. Neither of them have been particularly reassuring, but buckle up – this path might be the most uncomfortable yet, depending on your feelings about privacy.

Welcome to the Precision Economy – a world defined by hyper-surveillance. After many of the marvellous technologies we were promised (looking at you, self-driving cars) failed to live up to their propaganda, a lot of ambitious projects were taken off the table altogether. As a result, technological progress – automation in particular – slows to a moderate pace, and more attention is given to algorithms and the Internet of Things, which proves to be definitive for many businesses.

Let’s take a peek at retail – where robots never swept in to take the low-skill jobs from human workers. Instead, those on the shop floor are subjected to new levels of algorithmic oversight. In-store sensors collect data on footfall, whilst staff members are kept honest through the use of wearable technology (similar to the innocuous wearable tech many of us are sporting already). All data is passed on to manager-analysts, who review metrics and assign ratings following shift competition.

Equipped with future-gazing algorithms and real-time organisational data, employers quickly embrace on-demand labour strategies. New sectors succumb to ‘Uberisation’, and the ratings system becomes even more pervasive. Workers with in-demand talents or high ratings see enhanced pay and many opportunities for progression. Those who find themselves at the bottom of the league tables take jobs that are poorly paid (at the moment, 90% of Britain’s gig economy workers earn less than £10,000 per year) and offer very little control over working hours and minimal task discretion.

A divide forms within the workforce – those who believe that the constant surveillance is invasive and punitive, and those who argue that a meritocratic system generously rewards those who put real effort into their work. This growing rift is plastered over with clever UX, gamification, and the promise of upwards mobility for those who play along.

From Dystopia to Utopia

Young workers should focus on up-skilling and reskilling themselves – whether this means finding high-tech or high-touch jobs, or transforming their current role. We’re already seeing pilots of Personal Learning Accounts in France and Singapore, seeking to provide every worker with the funds necessary to reskill. For those who don’t thrive in flashy tech jobs or empathetic roles, we need to find a way to raise earning power and bestow more status on the work left over. Occupational licensing is one way to do this, but the issue needs careful consideration.

The worker’s voice will become very important over the next few decades, if we’re going to avoid a world where companies are able to pass risk and costs to a multitude of available independent self-employed contractors. Membership of traditional trade unions has been falling since the 1970s, but an alternative movement is currently picking up the slack, including new unions for gig workers and the self-employed. We’re already seeing groups challenge injustice within the gig economy. The English justice system recently determined that Uber must recognise its drivers as staff employees. Uber drivers in the US joined nurses, hospitality workers and others in the “Fight for US$15” campaign that sought to raise the minimum wage. At the time of writing, this campaign is on-going.

We should see programmes popping up to deal with the problems raised by an increasingly prevalent gig economy. For examples, look to Portify, a fintech company that’s currently leveraging open banking in order to provide gig workers with alternative credit-scoring. They’ve worked with platforms like Deliveroo and Swift to reach 30,000 users, offering a range of financial services to address economic insecurity.

As more of us turn to gig work and self-employment, regulation needs to become much more robust. We need clear rules for determining employment status and rights. GDPR must be strengthened, enforcing programmes such as data portability to allow workers to move their ratings across platforms. A robust competition policy should help reign in the superstar brands, but we really need regulators to work hand-in-hand with employers and tech companies, to ensure shared regulation sits at the core of every development.

Next in the series – The Empathy Economy